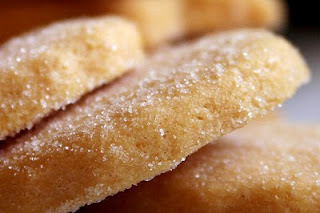 I know it's a day late for Burns Night, but yesterday was a wee bit busier than I expected it to be, so forget the haggis, I'm over it too, let's make some proper shortbread.  My Nana wouldn't exactly dissaprove of the vanilla addition here, but suffice to say the remainder of the recipe is all hers. Totally worth doing at any time of the year, and a hundred times better than anything out of a packet.

Preheat the oven to 160°C/gas mark 3. Put the icing sugar, plain flour and cornflour into the bowl of a food processor fitted with the double-bladed knife and give them a quick blitz (just to save you sieving, which is my most-hated job in the kitchen) before adding the butter along with the vanilla seeds you've scraped out of a pod.


Process again until the soft mixture coheres and begins to form a ball, loosely clumping around the blade. Turn this out on to a Swiss roll tin and press to form an even (or as even as you can make it) layer, using fingers or the back of a spoon, or both. Be patient, it will fit smoothly.


Using the tip of a sharp knife cut the pressed-out shortbread into fingers. I make two incisions lengthways - i.e. to form three layers - and then make 10 cuts down - so that you end up with 11 fingers per layer. Obviously, the aim should be to cut at regular intervals but don't start getting your ruler out. Just go by eye: uniformity is the province of the conveyor belt not of home cooking. Use the tines of a fork to make little holes in each marked-out biscuit: I press down about three times, diagonally, on each finger.


Now that you've pressed, incised, and punctured, slide the Swiss roll tin into the oven and bake for about 20-25 minutes, by which time the shortbread will be pale still, but not doughy. Expect a little goldenness around the edges, but shortbread should be not crisp but melting.


Remove the tin from the oven and let cool for 10 minutes or so, before removing, with a palette knife and your fingers, to a wire rack. Sprinkle with sugar and leave them to cool completely before storing in a tin.

Posted by Unknown at 12:11 PM 2 comments: Links to this post


Mix together the spices, garlic, parsley and 2 handfuls of coriander. Thoroughly mix half into the lamb with the lemon zest, season generously and squidge together with your hands.


Shape into 20 equal-sized balls. Heat the oil in a large frying pan. Fry the meatballs in 2 batches until just brown on all sides — about 5 minutes for each batch. Remove and keep to one side.


Put the remaining spice, herb and garlic mix in the same pan, stir over the heat for 15-20 seconds, then add the tomatoes and sugar and season well. Simmer for 25 minutes, until thick, stirring occasionally to break up the tomatoes.


Add the meatballs, cover and simmer gently for 15 minutes. Scatter with the remaining coriander leaves