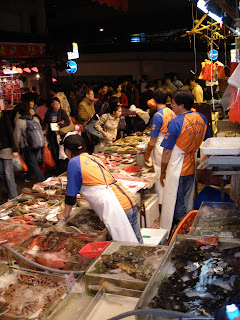 A cornerstone of Hong Kong lunchtime activity, and one of the sensations I crave the most right now. So cheap and in plentiful supply, my favourite being tucked behind Times Square in Causeway Bay, but if you don't have one of these great little neighbourhood eateries round the corner, the dish isn't exactly all that difficult to do at home.
750g skinned and boned white fish fillet or skinned prepared squid
4cm piece fresh root ginger, peeled
1 tsp salt
3 tsp fish sauce
4 tsp cornflour
3 big handfuls beansprouts, softened in boiling water for 1 minute
400g rice vermicelli noodles, prepared according to the packet, rinsed and drained
1.5 litres Asian chicken stock
12 trimmed bok choi stalks
6 string onions, shredded
Handful of chopped coriander and some chopped chilli, to serve

Pulse the fish in a processor to a paste. Grate the ginger.

Squeeze the juice from the ginger gratings over the fish (discarding the spent gratings), then add the salt, fish sauce and cornflour and knead into the fish mixture.

Mould the paste into small balls about the size of a walnut, cover, and then slip into the fridge to firm up.

Cook them in boiling water with the bok choi for 3 minutes, then drain. Divide the beansprouts, noodles, choi and fish balls between four generous bowls. Heat the stock with the spring onion until piping hot and then ladle over – this will reheat everything. Scatter with coriander and chilli.
Posted by Unknown at 2:15 PM