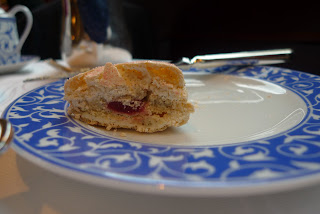 Macaroons - when made well, they are as addictive as MSG... made averagely, they're more often than not still a sweet treat worth paying out for. Be warned that making macaroons is not easy and will take practice to achieve perfection – particularly the piping bit, which might make you cranky and quite depressed. There’s also a bit of advance preparation, so it’s not really an option for a last minute whip up on a whim type treat. All that said - should you have the time, notion and desire - they are quite possibly one of the most rewarding reasons to have a cup of tea... the photograph was one devoured in Hong Kong a few days ago, and was a terrific example of macaroon making at it's best...

For the macaroon shells
225g icing sugar
125g ground almonds
125g egg whites (from about 4 medium eggs, but do weigh it out)
A few drops of lemon juice
25g caster sugar
20-30 drops of yellow food colouring

In two batches, put the icing sugar and almonds in a food processor and blitz until you have a fine powder. Stop halfway through and loosen any bits that have clumped in the bottom of the processor bowl.

Sieve the powder into a large mixing bowl – again, do it in batches. Try to sieve all but a teaspoonful of chunky almond bits, which you can throw away.

Put the egg whites into a clean metal mixing bowl and whisk until they start to hold its shape. Add a few drops of lemon juice, then gradually whisk in the caster sugar in two lots until the whites form stiff peaks. Finally, whisk in the yellow colouring until well combined.

Mix one-third of the whites into the dry ingredients. Then tip the rest of the whites on top and, using a metal spoon, gently fold them in, using a figure-of-eight motion. It will be stiff at first, but it will gradually loosen. You want it to be smooth and glossy, but not too liquid. The texture is very important and tricky to judge: when you fold the mixture, it should form a ribbon on the surface. Too runny, and you’ll end up with flat crisps; too stiff, and it’s meringue.

Take your piping bag, fitted with an 8mm plain nozzle. Stand it upright in a jug, then turn down the wide opening of the bag. Fill the bag with the macaroon mix, then turn up the sides and twist to seal the mixture inside. The idea is to get rid of any air so that when you squeeze the bag, a solid stream of mixture comes out of the nozzle.

Hold the bag in your right hand and the nozzle in your left (or the other way round if you’re left-handed). Hold the bag in front of you, tilted slightly and with the nozzle just above the surface of the first parchment-lined baking tray. Pipe a round, 2cm-diameter blob of mixture (by squeezing the closed end of the bag). Lift the nozzle sharply to finish the blob. Carry on piping more blobs, leaving about 2cm around each one to allow for spreading (they should spread to about 3cm). Continue until all the mixture has been piped – you should have about 50-60 blobs in all.

If any of the macaroons have nipples, smooth them gently with a wet finger. Leave them to stand for 45 minutes. This helps them to form a smooth shell when baked. Meanwhile, preheat the oven to 140c/gas mark 1)

Bake the macaroons in the middle of the oven, one tray at a time. After 5 or 6 minutes, they should have started to rise, forming a lacy collar around the bottom. Cook for a total of 12-15 minutes – don’t let them burn. The exact timing will depend on their size and your oven; try a small test batch first – leaving the uncooked macaroons on their trays won’t hurt them.

Remove from the oven and leave to cool on their trays. You should then be able to remove them gently without leaving the insides behind. If not, carefully ease off with a knife.

Beat together the lemon curd and mascarpone to give a lemon cream. Pair macaroon shells of similar size and sandwich together with 1-2 tsp of the cream. Eat immediately, or keep in the fridge for a day – they’ll be even better
Posted by Unknown at 7:15 AM