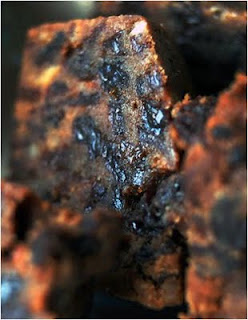 I know, it's barely the end of Summer and we're still making the most of what sunshine is left... but trust me, if you haven't already made this year's Christmas puddings, now is the time to do so. This delicious recipe has the seedy crunch of figs, a sparkle from hand cut peel and a slight tartness from the apricots and orange zest

350g sultanas
350g raisins, or currants
150g dried figs, chopped
125g candied peel, chopped
100g dried apricots, chopped
75g dark glacé cherries, halved
150ml brandy, plus some for flaming
2 apples or quince
2 oranges, juice and zest
6 eggs
250g shredded suet
350g soft muscovado sugar
250g fresh breadcrumbs
175g self raising flour
1 tsp mixed spice
You will need two 1.5 litre plastic pudding basins and lids, buttered, two old sixpences or two old coins, scrupulously scrubbed, two circles of greaseproof paper, buttered, large enough to cover the top of each pudding, with a single pleat folded down the centre of each. Soak the sultanas, raisins or currants, figs, candied peel, apricots and cherries in the brandy overnight. The liquid won’t cover the fruit but no matter; just give it a good stir now and again.
Mix the grated apples, orange juice and zest, beaten eggs, suet, sugar, crumbs and pour in a very large mixing bowl, then stir in the soaked fruit and the spice. Divide the mixture between the buttered pudding basins, tucking the coins in as you go.
Cover with the greaseproof paper, folded with a pleat in the centre. Pop the lids on and steam for three and a half hours. Allow the puddings to cool, and then remove the greaseproof paper, cover tightly with cling film and the plastic lid and store in a cool, dry place till Christmas.
To reheat: steam the puddings for a further three and a half hours. Turn out and flame with brandy.
Posted by Unknown at 2:08 PM