Serves 4
This aubergine dish is said to have been named after the priest, the Imam, who first tasted it and swooned at the flavour and amount of olive oil in it. Here, I have created a much lighter effect, but it’s still bursting with spice and Middle-Eastern promise. Simple to make and great served with warm pitta bread and pre dinner drinks in the garden. Made in exactly the same way but stuffed into some little baby aubergines for a bit more fancy pants stuff is exactly how dinner began at the Embassy this evening. There's been some thunder in the air these past few days, so this tropical feeling we're experiencing made this dish work all the better. 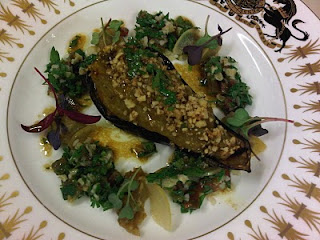 1 aubergine
Olive oil
1 large onion, finely diced
3 large vine tomatoes, skinned, deseeded and diced
2 tsp cumin
Juice of half a lemon
Sea salt and freshly ground black pepper
50g sultanas
Handful of fresh basil leaves, roughly chopped
Trim the ends from the aubergine, then cut lengthways into 1cm slices. Stack the slices together and cut into long strips, then cut across the strips to create neat, even dice, about 1cm in size.
Take a large frying pan and pour in olive oil to a depth of 1cm. Heat the oil and, when hot enough to turn a small piece of bread instantly golden, add half the aubergine cubes. The aubergine will quickly absorb most of the oil. Stir with a metal spatula and continue to fry until the aubergine is golden brown.
Remove the aubergine from the pan with a slotted spoon and drain on kitchen paper. Add more oil to bring the level back to 1cm and repeat with the rest of the aubergine.
Place the onion in a large bowl and add the tomatoes, cumin and lemon juice. Season well. When the aubergine has cooled, add it to the bowl along with the sultanas and basil. Cover and refrigerate for 1 hour to allow the flavours to infuse.
Posted by Unknown at 2:59 AM