So, last night saw the inaugural residence chilli off, and a variety of the most weird and wonderful showed up with no two the same which was both frightening and impressive in the same mouthful. The whole chilli debate is still raging the day after, beans or no beans, chocolate, Worcestershire sauce, rosemary  and apricots all featured last night, but did they work? One of the most surprising was started barely an hour before we gathered, some went on the stove three days ago!
Here's my number, which humbly, was pretty awesome should I say so myself, the half beef classically prepared with the other half made up of the smoked pork made mine the champion, well in my house anyways! 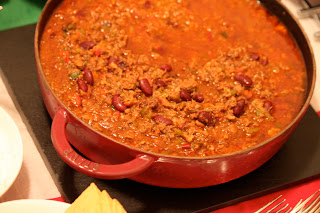 Serves 4-6
1 large onion or 2 banana shallots, chopped
2 cloves garlic, finely chopped
Half a head of celery, finely chopped
2 chipotle chillis, deseeded or keep half with seeds if you like it spicy
2 sprigs of thyme, leaves picked and roughly chopped
Olive oil, for frying
500g good quality minced sirloin of beef
300g pork belly, barbecued/smoked and minced
1 tsp ground cumin
2 tsp sweet paprika
1 tsp dried oregano
1 beef tomato, roughly chopped
400g chopped tinned tomatoes
2 tblsp tomato puree
100-200ml chicken or beef stock
3 tblsp tomato puree
1 cinnamon stick
1 bay leaf
400g kidney beans, drained and rinsed
Salt and pepper
Handful of chives, chopped
200ml soured cream
Boiled rice, to serve
Sweat the onion, garlic, celery, chilli and thyme in 2 tablespoons oil in a large saucepan. At the same time, brown the mince in a separate pan over moderate heat in a little oil.
Add the dried spices to the onion mixture and cook until they release their aroma. Then stir in the beef and mix well. Add in the pork at this stage. Add the fresh and tinned tomatoes and leave to cook down a little for at least 30 minutes. 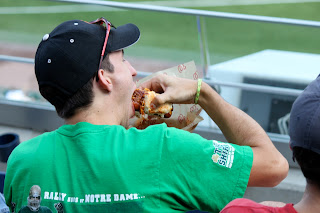 Pour in the chicken or beef stock and stir in tomato puree to taste. Drop the cinnamon and bay leaf in then bring to the boil and leave to simmer. Transfer this now to a slow oven, around 150c/300f, covered, for up to 2 hours, checking occasionally. Remove from the oven now that the sauce has thickened, add the kidney beans and leave to cook for another 5-10 minutes to allow the beans to soak up the flavours. Check for seasoning.
Mix the chives and soured cream together. To serve, spoon the chilli into the centre of a mound of rice, with the soured cream and chives in a separate bowl on the side. World champion material if ever I saw. This is the stuff you really want on your chilli dog...
Posted by Unknown at 1:02 AM