Flatbreads in the Indian manner and Udon with shepherd's pie filling

I have travelled a fair bit, and have found my way pretty well in a fair old cross mix of countries. Often leaning back on those travels when hunger rears its regular head, and in my humble opinion there's nothing quite like a whiff of nostalgia to loosen up the appetite. One country I've never been to (shame on me) is India, but that will change sooner rather than later with an impending wedding invitation not too far off. With the recent news of this, and a little bit of bread experimentation the past couple of days, a kind of a flatbread naan number was born. Nothing new in the sense of rolling out some dough and slapping it into a super hot oven I know, but such fun to play with a variety of toppings and see the creations puff in seconds before your very eyes.

There was a dinner I had a few years back a couple of hours outside Napoli. Now, I tend to remember most meals, and this one I certainly do for this singular reason. Just the crispy, salty pizza-like flatbread we were deluged with before our food proper came to the table, this was why that restaurant existed I'm sure. I'll be damned if I can remember what I actually ordered that night, but those pillows of slightly charred crust were to die for. Dribbling in terrific olive oil, and almost too much great sea salt, but not quite, and cooked in seconds in a fabulously hot wood fired oven, they were for sure the best part of that adventure by a long way. 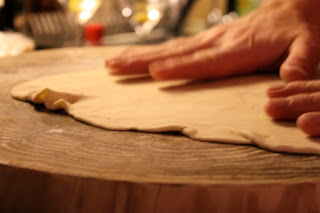 So therein lies a flash of the reason why, but the rest of this meal of mine is best left to a matter of necessity. Shepherd's pie base left over from the other day was sure to make a great sauce for pasta. Alas no pasta in the cupboard, but a pack of jolly expensive udon filled in the gap instead. I'm going to get hung drawn and quartered by my Japanese friends for this, but they made for a pretty outstanding substitute for the missing pasta... I shall remember that dish in the same way the flatbreads will continue to make an appearance at home...
These are slightly lighter than typical curry house naan breads but an equally delicious accompaniment to any Japanese dishes you might be knocking up! Don’t be tempted to overbake them because they will be dry and hard. They are best eaten straight out of the oven while still warm. If you are making them ahead, slightly under-bake them, then just before serving, sprinkle with water and finish under the grill
Makes 10-12 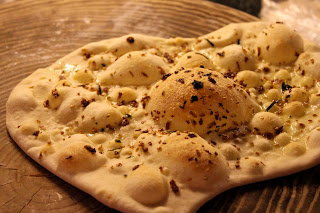 500g strong white flour
1 tsp baking powder
1 tblsp caster sugar
1 tsp fine sea salt
7g sachet easy-blend dried yeast
200ml natural yoghurt
2 tblsp groundnut oil
For the toppings
Sesame, kalonji, cumin or poppyseeds, freshly chopped garlic and coriander
Melted butter, for brushing
Sift the strong white flour and baking powder into a large mixing bowl. Stir through the sugar, salt and dried yeast, then make a well in the middle. Whisk the natural yoghurt and groundnut oil together and pour into the well. Add 150ml tepid water, then mix everything together to make a soft dough. If the dough seems dry, add a little more tepid water. Knead well for about 8-10 minutes or until the dough is smooth and elastic. Cover and leave in a warm place until doubled in size. 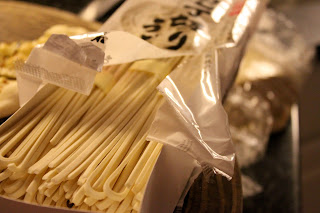 Preheat the oven to 220C/Gas 7. Place a roasting tin half-filled with water at the bottom of the oven. This will create moisture, which will prevent the naans drying out during baking. Punch down the dough, then divide into 10-12 equal portions. Flatten and shape the portions into teardrop shapes, spreading the dough with the tips of your fingers. Transfer to lightly greased baking sheets.
Sprinkle your choice of toppings over the naan breads, pressing them gently into the dough. Brush the surface with the melted butter, then bake in the oven for 10-12 minutes, turning halfway, or until the naans are risen and cooked.
Posted by Unknown at 11:38 PM