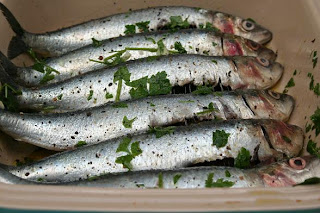 The poor man’s fish has never been more fashionable. I've seen it most recently gracing some of our very 'best' restaurants, and is as popular as it rightly should be. In mainland europe, the freshest, locally caught sardines have always been treated as a delicacy, and more often than not are at their best simply grilled or barbecued.

This said, the oily strength of the fresh sardine can cope with an abundance of amazing flavours. They can be fantastic marinated and can stand up to strong spices. They can also happily take sour and acidity which counters the oiliness of the sardines.

I was involved in a decent conversations with one of my closest ever friends a couple of days ago regarding his new menus for a restaurant opening he is in the final stages of. We were poring over his breakfast menus and racking our brains for something a little different but a bit of fun too.

We started talking about tinned pilchards in tomato sauce on toast, which evidently is a comfort snack to more than you'd imagine, and there’s absolutely nothing wrong with tinned sardines on toast for a quick lunch on the hop. But I think we're going to look into putting freshly roasted sardines and slow roasted tomatoes with a hint of thyme and rosemary on top of griddled slices of ciabatta, and see where this takes us.
Something along these lines...which should be enough for 4 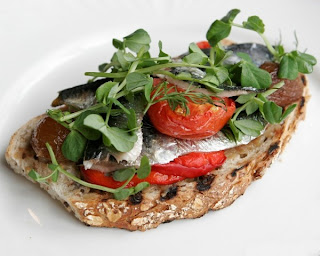 3 sprigs thyme, leaves ripped off
1 sprig of rosemary, needles picked
Olive oil, for drizzling and brushing
4 thick or 8 thin slices of ciabatta
A handful of fresh greens such as peashoots

Heat a griddle pan until almost smoking. Brush the ciabatta lightly with olive oil then season with salt and pepper. Griddle on both sides until toasted and slightly charred.

Divide the ciabatta between plates; place the roasted tomatoes on top. Slice the heads off the sardines; serve whole or filleted on top of the tomatoes. Spoon over the pan juices and sprinkle a pinch of greenery and serve immediately. A good cup of tea and the morning's papers essential.