A mushy pea fritter by the sea, or fancy crispy squid?

There are few British delights left, that are quite quintessential as a poke of chips by the water. Whether it's on a promenade, a shingle beach, a pier or a pathway, this food sensation and the water's edge are destined to be. The fish and chip shop is as competitive a market as I've ever seen, and creativity abounds in a place where not so long ago you'd be hard pushed to see much more than cod or haddock, let alone an offering of posh prawn cocktail, followed by sea bass with a side of Caesar salad. But this is all good in the continuation of the British food movement forward, a subject close to more artery clogged hearts than you think. 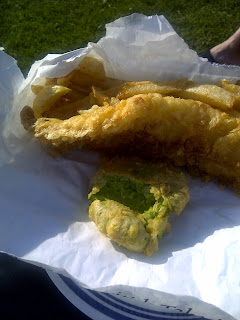 Excuse the shabby phone pic, but this delight was from a pristinely clean place called Alexander's in Mudeford, Dorset. Where the 20 minute wait for the cooked to order cod, advertised at today's market price, was worth the lengthy queue. A splash of chilled pear cider and a seaside sunset and all was good with the world.

The thing that's most bothered me of late though, is the speed at which our chips go limp. No matter how quickly you get them out of the wrapping, or dig them from the bottom of the flower pot at the Bog and Chuckle I wanna be a Gastro pub, your chances of keeping them fresh are as slim as you'd be through the research process of such a dilemma. Anyways, don't think that the death of the chippy is upon us, far from it for that matter, but just in a let's spice things up with a wee bit of something super crispy from the kitchen. 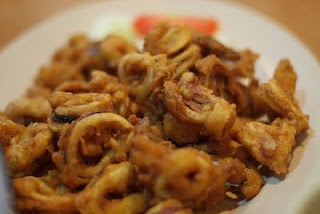 For the aïoli
6 garlic cloves, peeled and finely chopped
1/2 tsp fine salt
2 large egg yolks
60ml light extra virgin olive oil
100-125ml vegetable oil, such as sunflower
First make the aïoli: put the garlic and salt in a mortar and using the pestle, grind to a paste. Put the garlic in a small food processor, add the egg yolks and mix well. With the machine running, slowly add the combined oils, a little at a time, until the mixture is very thick. Use immediately, or transfer to an airtight container or jar and refrigerate for up to two days.
Rinse the squid under running cold water and pat dry using kitchen paper. Cut the tubes along one side to open them out. Using a sharp knife, lightly score the inside surface of each tube in a criss-cross pattern, making sure you do not cut right through.
Then cut them into about 4cm pieces. Cut the tentacles into bite-sized pieces. Fill a heavy-based saucepan with vegetable oil and heat to 190C, or until a small cube of bread turns golden in about 30 seconds. While the oil is heating, combine the flour, paprika and salt in a bowl. Add the squid and mix until well coated. Shake off the squid and add to the oil in batches, cooking for 1-2 minutes each batch, or until golden and crispy.
Remove with a slotted spoon and drain on kitchen paper. Serve warm with alioli on the side.
Posted by Unknown at 1:52 PM