There's nothing much better than a Mackerel sky

Generally speaking, I'm a massive fan of mackerel on a barbecue in the summer, slathered with a fist of lemon juice and a heavy hand with the seasoning including a smatter of chopped green chilli. Although becoming (already become) quite the fashionable fish, it's still relatively cheap and very available while being very good for you in an oily fish kind of a way. Barbecuing aside, there's a ton of recipes out there for the mackerel, the only thing I'd say is catch it (or buy it) and cook as quick as you can, it does have a tendency not to stay at it's best for too long. 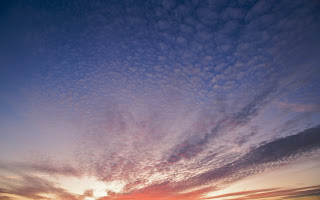 Here's a thing for you, a mackerel sky is one of those views as you look up at a seemingly endless sea of extensive clouds that look like fish scales on a bright day. Clouds that are small and white, and usually line themselves up in groups in a regular pattern are something we might not see again for a while now summer is as good as officially over...
Back in the kitchen though, autumn flavours are starting, and a most welcome change in tempo indeed. This is a terrific one oven tray dinner, but for a great finish to the mackerel, run a blowtorch over the fish to blacken and blister the skin just before serving. This gives it a certain smokiness, really brings out a new dimension to the flavour and makes a massive difference.
Mackerel with new potatoes and bay leaves
Serves 3-6 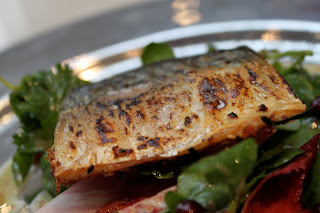 1kg new potatoes, scrubbed, the bigger ones halved
2 red onions, halved and sliced
12 bay leaves
6 garlic cloves, unpeeled but bashed to break the skins
2 lemons, halved and thickly sliced
3-4 tblsp olive oil
Salt and freshly ground black pepper
30g butter
6 mackerel fillets
Lemon wedges, to serve
Heat the oven to 180°C/350°F/gas mark 4. Scatter the potatoes in a roasting tin with the onions, bay leaves, garlic, lemon slices and olive oil. Season well; toss everything to combine, then dot the top with the butter.
Roast in the oven until the potatoes are browning and tender, rattling the tin once or twice – about 30-40 minutes.
Carefully take the tin out of the oven. Season the mackerel fillets and lay them skin-side up on top of the potatoes.
Return to the oven and roast for a further six to 10 minutes, depending on the thickness of the fillets, until the mackerel is just opaque. Serve with some lemon wedges and an interesting salad - the fish can take bold flavours so don't be afraid to throw a few capers, maybe some chilli or some pomegranate into a bit of extra dressing here.
Posted by Unknown at 12:15 PM