tapas still has a long life to lead

London, the weather and the games have finally arrived. At this very moment there's honestly no city quite like it, and it is a privilege to be a part of it - so now onto championing the food of Spain... 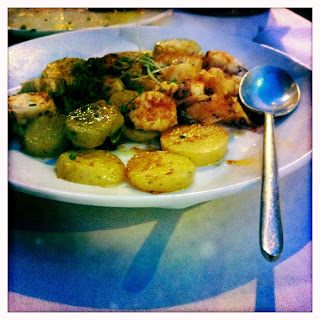 The fad of tapas has come, gone, returned, faded and reignited more times of late than any other food stuff, but right here right now, there simply isn't anything else on offer (maybe a good barbecue aside) that ticks quite so many boxes.


London has finally stumbled upon the summer we've waited so long for, and simply anywhere with outside space to dine this week has never been so popular. Grazing the way through a delightful menu while watching the world pass you by is the way to go. If you have your own outdoor space, then there's little excuse not to have a go yourself, there really is nothing better than sharing some plates at home. Let the sun shine long! 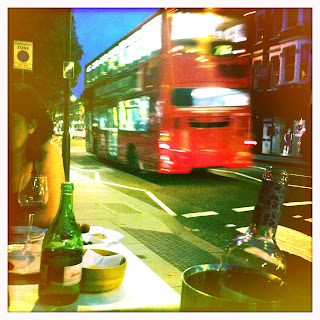 
Freezing octopus tenderizes it. No need to beat it. Blanch the thawed octopus in boiling water for one minute. Drain. Bring another pan of water to a boil with the slice of onion and the bay leaves. Add the octopus and let it cook at a simmer for about one hour. It should be tender, just a little chewy. Remove and let it cool slightly.

When cool enough to handle, slide off the pinkish skin and discard. Cut the potatoes in half and add them to the same water in which the octopus cooked and cook them until tender. Cut the octopus into bite size pieces and if possible sear very quickly in a hot pan, a crispy edge to the pieces will make a difference. Arrange them on plates with the potatoes. Sprinkle with salt, pimenton, garlic, and drizzle with the oil. 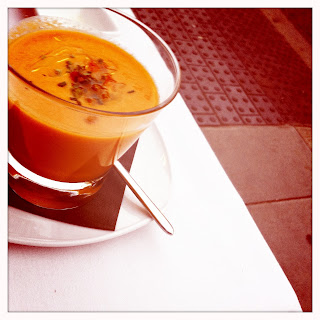 Or a quick gazpacho

Put the chopped tomatoes, spring onions, garlic and cucumber in a blender and whizz until smooth. Pass through a fine sieve 2 or 3 times to remove most of the pulp.

Put the mix back in the blender and slowly add the olive oil and sherry vinegar and season well. Chill in the fridge before serving. Top with anything you fancy - a crumble of toasted bread, a few slices of spring onion and cucumber, a splosh of olive oil.