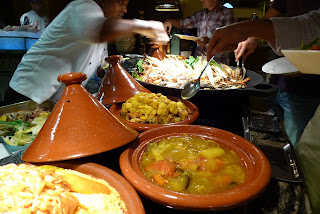 Breaking the fast at sunset has never been so much fun! Actually, as I'm joining in with my neighbours this year, the feeling of finally having something to eat after the best part of 18 hours with neither food nor drink has honestly become quite exciting... For someone so used to handling food all day long, feeling, touching, smelling and above all tasting - not being able to have a flavour sensation for such a long time really does heighten the senses to an amazing degree. my taste is sharper, the identity of subtle seasonings clearer and the understanding of carefully blended combinations so much more appreciative.

Since many of the people I'm working with, and the vast majority of our guests, have not eaten at all during the day, they are more often really cranky and quite hungry by the time Iftar comes around, and most of them hasten to end the fast as quickly as possible after sunset.

I've discovered that this is the perfect opportunity to break down a few dishes and look at how we can make them better by really tasting them and understanding what is in them. 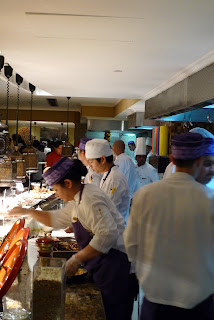 This recipe is an example of what I mean, we've taken a traditional Moroccan pastilla and tarted it up a bit for a finer dining occasion...

Shred the duck confit and divide between the four pancakes. Fold the pancakes into parcels, sealing the edges with a little water, and then trim the excess pancake to make 5cm x 3cm rectangles. Deep-fry until crisp, then drain on kitchen towels; keep the parcels warm.

Heat a thick-based frying pan over high heat, add the foie gras and cook until brown on both sides, about 2 minutes; season with salt and pepper.

To assemble, cut each pastilla in half and dust generously with ground cinnamon and icing sugar. Place at the top of the warmed plates and place the foie gras beneath. Drizzle the sauce around the plate and serve immediately.
Posted by Unknown at 7:21 AM